The Dragons inaugural State of Origin tournament was a raging success, with the event cementing itself on the calendar for years to come. The Croweaters prevailed after three tough games, with the Allies pipping the Vics for second.
Coaches reports 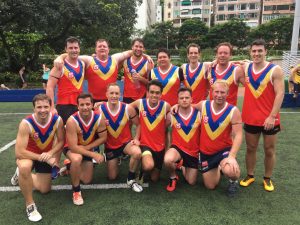 SA – Auldy
An undermanned team of pure blood free state men dominated the State of Origin, with flashes of the great 90’s team of Sticks, Bradley and the Jarmans.
After taking an early 4 goal lead against the Allies, the composite team fought back to be in front with 5 minutes to spare. Mt Gambier rover Caolan Rafferty stood up when challenged, dominating the Allies Captain and kicking two goals to put SA in front. In true Tanunda fashion, Sam Agars kicked a junk time goal to seal a great win.
With the Allies beating the Vic comfortably, SA could take up the cup with a win against the much (self) fancied Victorian outfit. Victoria had 15 players on the bench, with more passengers than a Powderfinger album. SA shot to a quick lead, thanks to Snowtown forward Justing Bentley kicking straight and Henley Beach centre man Dwight Stuchbury dominating the clearances. The Vics fought back due to some loose defence from Angaston stump Jock Auld and some inspiration was required in the final minutes of the game. Insert Jimmy Walker, the aerial excitement machine, who was locked in at Full Forward. With 30 seconds to go, Rowan Tape from Hackney, scooped a loose ball on the run, thumped it on the boot towards the Walker danger zone. From nowhere, Walker took three strides – each on the back of another Victorian opponent and with an outstretched arm, took the ball 8 feet in the air for a Brett Burton styled hanger. Not since the Eureka Stockade had the Vics seen their fortunes turn so quickly. Jimmy did as all champions do, he went back, slotted the goal and the SA boys took the biscuits.
Thank you to Eudunda lad Micheal Keen and Springton born speedster Malvin Hughes for making an international journey to play for the Croweaters and to Barbs for organising a rippa day. 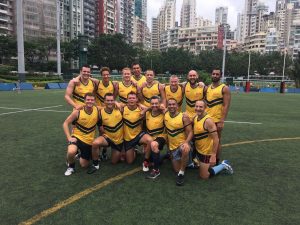 Allies – T-Bird
The Allies decked out in a striking yellow jumper were ready for a big challenge against the two power-house states of Australian Football. We were beautifully represented from around the country including WA, NSW, and Tasmania, and special representative guests from Ireland (Pirate) and France (Prav).
Straight into the action, game 1, vs SA with the to be expected physical contest. Lacking in height the Allies tried a few ideas in the middle but found it tough to match up on SA’s ruck brigade. Burkey, Cheiwy were strong in the middle in game 1.
After giving the SA boys a run for their money we rolled straight into game 2 against the big V. Our boys were fired up and hungry for a win, again a physical affair and some good chirp. Christian Cook came to the party and dominated through the midfield as well as converting up forward. Our Irish import Pirate also created plenty of play as well as some 6 pointers. Boe took on the play in defense and bashed through some packs to get the ball into attack. Similarly Waz was strong in the back-line once he sobered up from the night before.
It was a spirited win for the Allies cementing our spot as the clear number 2 on the day, and many would say not far off top spot! All in all a wonderful concept that is sure to be a permanent fixture on the Dragons annual schedule. Special call out to Barbs who was the driving force behind the day’s operations and merchandise. 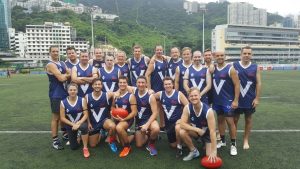 Victoria – Animal/Barbs/Barree/Maz
(more handballs here than the team had last weekend and proof that the Vics leadership issues go far deeper than just on field)
New boys BJ, Heat and Flemo were shining lights for the winless Vics and will add significant depth come Champs. Matt Cook was strong in defence and Barbs was instrumental at the contest. Despite competing hard all day we struggled to convert our chances and this was especially costly against the Allies, while a gallant effort against SA saw us fall just short. Barree and Nichola were strong targets up forward, while the search party is still out for Ginno and Hammer after failing to show following a big Friday night. Both players maintain they would have been the difference.