A bit from the skippers

Typhoons
Game 1 saw the Typhoons take on the Guangzhou Scorpions in near perfect conditions.  After a jittery start the team stabilised with a couple of goals from Maz who was manufacturing space nicely up forward. Braks’ fitness training was paying dividends as the big man covered a lot of ground in both halves. However the standout was newcomer Dave Lonerghan who’s skill and athleticism was a welcome treat in an undermanned squad.

Our second match against the star studded Stingrays was always going to be a challenge with several of our key players out. The situation was made worse by losing Ash through injury. I take my hat off to Lachie Evans who showed incredible sportsmanship in offering to play for the Phoons and bringing handy forward “Thorny” along with him. We went down by 4 goals but the match was extremely competitive and close around the ground. For me this match really epitomises what SCAFL is all about, not so much the score but the spirit of good footy played amongst mates. Standout player for the Typhoons was Ian “Salty” McDonald whose bash and crash defence kept the phoons in the game right up until the final siren.

Cobras
The Cobras were undermanned for the trip to Macau but there were certainly some positives to take out of the day.
Jimmy Walker and Jessica Cole played their first games as Cobras but didn’t see much action in the forward line. Boe did an amazing job on Sammy Agars, completely nullifying the Lizards ruckman. Easty found plenty of the ball and most likely took the 5 votes in a losing side with Bents making a strong contribution in the centre as well. Eamon did a great job on Coops and Mitchy played very well as well. Our second fixture matched us against Macau who were ahead before the bounch fielding 12 players to our 10. Bents and Easty kept us in the game for the first half but we ultimately ran out of legs. Jimmy was moved into the ruck and battled heroically, winning the lion share of restarts. Jess found more of the ball and won pivotal contests, capping off a great debut gameday. Although our first two games did not result in a win, it would be fair to say the cobras dominated post match festivities, congratulations to all involved. Next round we welcome back our Captain and Vice-Captain and I have no doubt we will return to the winners circle. – J. Auld Assistant to the Captain

Lizards
It was a fruitful day for the Lizards, with three wins from three matches catapulting the reigning premiers up the ladder. Easy victories over an undermanned Cobras side and Macau were followed up by a hard-fought win over the Scorpions in the final match of the day. Matt Cook was a standout, while Shaun Cooper took ownership of the forward 50 in a display that is likely to see the absent Chris Barr playing much higher up the ground on his return. Jonny Moran continued his transformation into one of the competitions premier rebounding defenders, while Paul Mallia was dynamic. Best wishes to Cooky as he recovers from a wrist injury.

Stingrays
Further fuelling speculation the Stingrays think they are above the SCAFL, they failed to follow league protocol and did not submit a review. 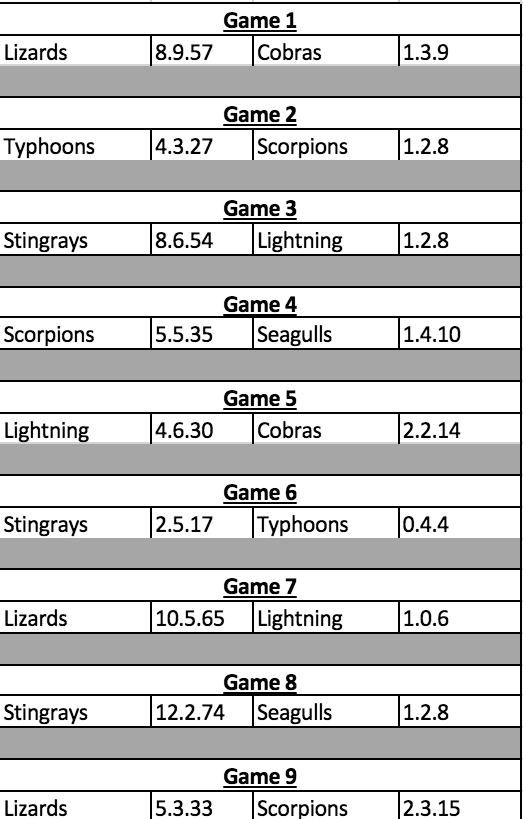