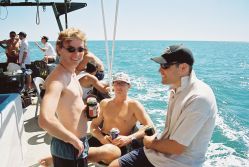 On Sunday 25th July, former Dragons (and one still presently playing) gathered at the MCG as special guests for the Melbourne FC Coterie Group luncheon held in the Jim Stynes Room. While Melbourne blew Sydney off the park, much intrigue surrounded the gathered international footballers.

The luncheon hosted 140 guests. When the Dragons were introduced, a hearty Melbourneske round of applause ‘if you don’t mind old chum – well done olde boy – hurahh’ welcomed them. As international footballers, the Dragons all took the attention and kudos in their stride.

Club founder Ray Wood and former Dragon Bruce Brown organised the gathering. Woody even managed to dig out the Fosters Cup won by the Dragons on the 6th June, 1998 against Saigon. This prompted many interested punters at the luncheon to inquire about the ‘myth of the Dragon.’ Woody was all too happy to endear those who were in his presence with Dragon related tales. While the author of this article recalls listening about certain heroics of the said game, the Carlton Draught took its toll by mid-arvo, hence I’m unable to elaborate any specifics. By all reports Glen Fleisher, Colin Reid, Bruce Brown, Garth Mc Lardie, and John Thompson represented the Dragons jumper with aplomb.

Woody certainly had many tales to tell, another relating to kicking drop kicks against rather ordinary opposition. Perhaps best I retell that snippet another time………..

Gathered on table 10 were members of the now famed (apologies Farm but it can’t be ‘Farmed’ as you weren’t at the 2007 Champs) 2007 Asian Champs winning side. In conjunction to Tony Tere and Dale Cooney were several 2007 Asian Championship players; Matty ‘I’m Hard’ Campbell, Nathan ‘Light Me’ Byrne, Paul ‘The Falcon’ Mallia, Chris ‘Angry Man’ Nicolay and Shannon ‘Shags’ Morgan. They reminissed about that drawn Grand Final that went into extra time, with the Dragons finishing the stronger unit against the Bali Gekos by 17 points. Byrnesy was rather emotional (again), reliving some of those special moments.

As the afternoon wore on, much interest surrounded what Garth Mc Lardie had to say about how the Dragons club song came into fruition. Watch this space for an interview with Garth in the coming weeks.

At the conclusion of the function, the Dragons left behind many new admirers and proceeded to stagger across Punt Road to sample some beers at some of the more iconic post football watering holes. Unfortunately, the security staff took one look at the elder Dragon contingent and entry was duly denied.

The Dragons then managed to talk their way into the trendy Precint Hotel – Bridge Road, somehow convincing a flat-nosed bouncer with pursed lips and a kiwi accent to set aside his dislike for international AFL stars and lower the drawbridge to amber fluid heaven.

Special thanks to Ray Wood and Bruce Brown for organising this memorable event. Quite a number of Dragons travelled vast distances to attend this reunion which in itself highlights the strong ties the club has, be it for present and or past players.