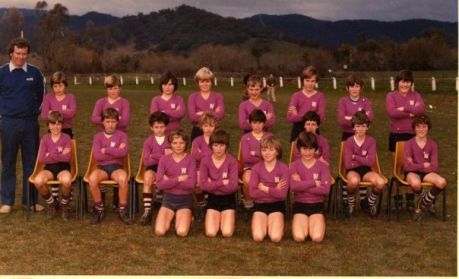 Hi mate and cheers for participating in the latest edition of the Fire breather.

Brian Jackson – no relation to the colorful former VFL footballer Mark ‘Jacko’ Jackson are we?

No, though I played a game a couple of years ago with two of my younger brothers and it got a bit confusing with three Jackos running around the ground. There was about 20 feet of Jackson on the field that day!

Jacko, you’ve been blessed with height, terrific footy nous and obviously know your way around a footy ground. Where and when did you first pull on the boots?

I’m from Whorouly, a small town in north-east Victoria, and played for the local team growing up – there were a lot of very handy players around the club and a great atmosphere plus there really wasn’t much else to do. I think I started playing for the Under 10 side when I was about six, so that would be probably be around 1977. (Have attached a photo, I’m up the back, third from the right). Have played footy every year since.

I take it the Dragons football manager was not at arrivals to greet you and your family upon landing in Hong Kong. How did you actually make your way to the Dragons lair?

Before I came to HK I spent several years in London and New York and played for teams there, so I was used to the glamour of international football and keen to continue in Asia. Plus I played with Crights back in New York and Winesy at Melbourne Uni a long, long time ago. I couldn’t believe Winesy was still playing!

How many games have you played with the Dragons thus far Jacko?

Not sure – about 10 or so I think. Played at the 2009 Asia Champs in Kuala Lumpur and then a few home games last year, but broke my arm just before the 2010 Asia Champs. Looking forward to an action-packed 2010.

And you’re on ground highlight so far? Talk us through that game/s please.

I actually had a run with the ball and took a bounce in one of the games last year – haven’t done that since some time in the 1990s!

The Dragons veteran list has grown in recent years. Is 40 too young to be branded a ‘veteran?’

Ask my wife. Actually don’t. The good thing about aging as a ruckman is that you don’t really slow down that much.

I’m tipping time is precious in Jackoland; with your family, your international football career with the Dragons, working in International Finance and TV Super stardom, how do you juggle such aspects of your life?

And finally, how’s the arm coming along and when can the Dragons faithful see you again doing your best work?

Got the all-clear from the doctor so I’m right to go and will be off to Vietnam for the ANZAC Day clash – should be a great trip.

Thanks for your time Jacko and happy 40th!