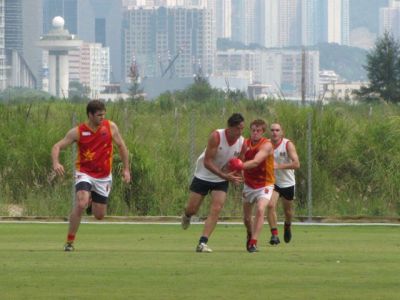 The Hong Kong Dragons has attracted many players from all walks of life, however non more eminent than ‘The Doc.’ Acting as the Deputy Consul-General for the Australian Consulate, David Livingstone has represented the Hong Kong Dragons for several years since his initial secondment, commencing his playing career in 2008, resulting in 16 games
for the club.
Sadly for the Hong Kong Dragons, Dave’s time in the Dragons lair will come to an abrupt end in January 2011, where he’ll be taking up a position in Baghdad. What player the Dragons will receive in return from the ‘Baghdad Bombers’ remains to be seen.

Those who have acquainted themselves with Dave will acknowledge his professionalism and dedication to the club. Dave is built like the proverbial however, another side surfaces from him when conversing about say, recent trends in wine making techniques in the Barossa Valley or current negotiations in free trade between China and Australia.

Paul: Dave, thankfully you’ve not had to use your influence to assist any Dragons with foreign law agencies when on tour (Read: ‘An Idiot Abroad’). What general advice would you give to the Dragons should a tour to Baghdad against the ‘Baghdad Bombers’ be scheduled?

Dave: Baghdad is an historic city of deep cultural significance, and I know these things are a focus for Dragons on tour. It also has bars and nightclubs of dubious repute, but there’d hardly be time to consider them given the number of museums and galleries to see.

Paul: Your football career in Australia. Where and when did you first don the boots and have you always been a specialist ruck man?

Dave: The first non-school football team I played for was Nunawading (EDFL) in 1973. I used to play centre-half back, but I could run in those days.

Paul: Who was the most talented player you either played with or witnessed during your time as a Dragon?

Dave: I’ve played with so many really talented players in the Dragons. A few that come to mind are Woody, Stuch, Barbs, Gags, Jono, Josh, and Matty Baron. But that list doesn’t do justice to the many others that I’ve admired, including all the players who play with a lot of heart and never hesitate to put their head over the ball. And then we have the new generation coming through – Chris, Christopher and Thomas, all of who have courage and skill.

Paul: What tour and or game is a standout for you?

Dave: The 2008 Manila tour was a stand out for me as the first tour with the Dragons and winning the Manila Cup. A great experience. The Champs this year also stood out because the guys from Dubai Heat collared me at the end of the dinner to tell me of their admiration for the Dragons. They said the Dragons were the best team they had played in the competition, and that the Dragons never failed to take it up to Dubai physically. Dubai
always had a fight and a tough match on their hands against the Dragons.
Of course they were pissed, but they were heart-felt compliments. Naturally I was pretty proud to hear it. The Dragons are a great team. The players have skill, but more importantly they play as a team and with a lot of heart. It is why I have always thought I wouldn’t want to play for any other team.

Paul: Dave, I’ve noticed you’re a Graduate of the Royal Australian Navy Staff College. Are you still an avid fan of ‘The Village People?’

Dave: A lot of people have insisted to me that the Village People have been replaced by the Singapore Wombats. I’m not sure that’s true, but it is something I wouldn’t want to test in the showers after a match.

Paul: Dave, your job enables you to rub shoulders with many people from all walks of life. While meeting the usual array of business people and dignitaries, who’s been some of the more memorable individuals, you’ve met?

Dave: In most countries that I work, there’s the usual suspects of rich and famous whose decent Scotch I get to drink. But the most memorable are the people who do great things for others. In Ethiopia there’s an Australian woman, Catherine Hamlin, who started a hospital for women. The hospital has changed the lives of thousands of people in that struggling country, and I really admire her and the others who dedicate their lives there.
http://www.hamlinfistula.org.au/

Paul: You’ve certainly left your mark on the club. Finally, any message for current and aspiring Dragons?

Dave: I’d just like to thank the people behind the scenes that do a lot of work for the club – Boges, Bowski, Stuch, Barbs, and others, and of course, the coach, Winsey. And thanks to all the Dragons I’ve had the honour of playing with. I am grateful for the welcome and mateship that they gave an arthritic dinosaur, even though my style of play is stuck in a time warp from another era, and that I’ve missed some of the key events on tour. It is that
generous spirit that makes the Dragons a great team, and it is a player’s good fortune to join the Dragons.

Paul: Cheers Dave. Congratulations on your time with the Dragons and all the best to you with your future endeavours.